SAAC is pleased to announce the selection of D. Brent Miller as the director for this summer’s upcoming production of the well-known musical, “Mamma Mia!”.

The public is invited to come meet and visit with Miller about the production at a reception Saturday, March 14, from 6:00pm to 7:30pm.

“Mamma Mia!”, sponsored by MurphyUSA, is anticipated to be one of the most popular musicals SAAC has performed in years.

This is not Miller’s first time to sit in the director’s chair at SAAC. He served as musical director for last summer’s production of “The Hunchback of Notre Dame”. He loves El Dorado and the people at SAAC and is always happy to come back. “I’m so glad to have the opportunity to work with the ‘home guard’ at SAAC again,” said Miller. “It’s always such a pleasure.”

Miller is originally from Warren, Arkansas, and holds a BA in music, with emphases in musical theater, voice, and piano from the University of Arkansas, Monticello, and made his professional debut with the Louisiana Lyric Opera in 2008. He made his first appearance in the Little Rock theater scene with ACT in 2014 as Motel the tailor “Fiddler on the Roof”. He has also played Charlie Dalrymple in “Brigadoon”, Jacob in “La Cage Aux Folle”, Dickon in “Secret Garden”, Luther Jones in Michael Rice’s original musical drama “During Wind and Rain”, and Jacob Marley in “A Christmas Carol”. Recently, he served as music director for “Sweet Charity”,” A Christmas Carol”, and “Follies”, as well as last summer’s production of “Hunchback of Notre Dame” at SAAC. Brent has conducted pit orchestras in Houston and surrounding areas for various theaters. Some of those credits include “Les Miserables”, “Camelot”, “Joseph and the Amazing Technicolor Dreamcoat”, “Anything Goes”, and “Sweeney Todd”. He has also been guest conductor for the Brazosport Symphony Orchestra, and worked with the HGO Chorus. Some of his other previously performed stage roles include John in “Miss Saigon”, Tobias Ragg in “Sweeney Todd”, Seymour in “Little Shop of Horrors”, Matt in “The Fantasticks”, Papageno in “The Magic Flute”, Scarecrow in “Wizard of Oz”, and Phil in “White Christmas”.

SAAC will host a “Director’s Q and A” on Saturday, March 14, from 6:00-7:30pm. This will be an informal time where people interested in auditioning can ask Miller and his production staff questions about “Mamma Mia” auditions. Auditions will be held on Friday, March 27 at 6:00pm and Saturday, March 28 at 2:00pm. If you are unable to attend auditions, the director will accept video auditions due by 9pm Friday, Marach 27. Anyone who can not attend auditions or submit a video by the deadline, please contact the production staff by email at rehearsal@saac-arts.org. 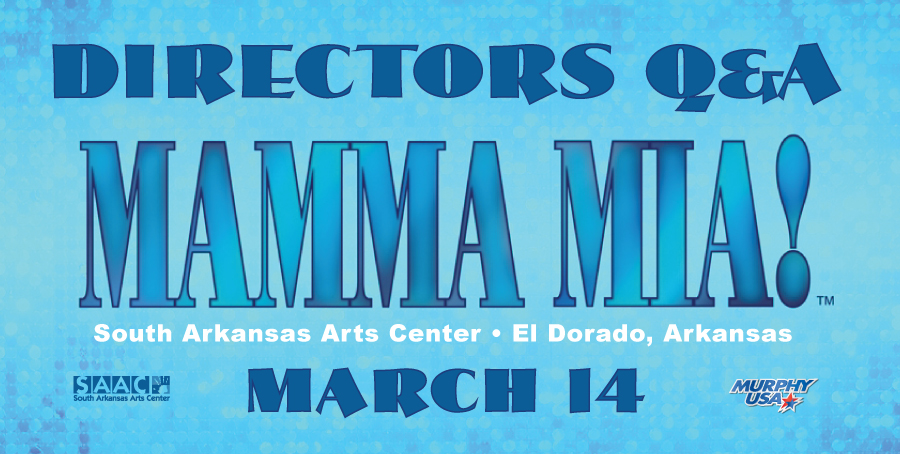