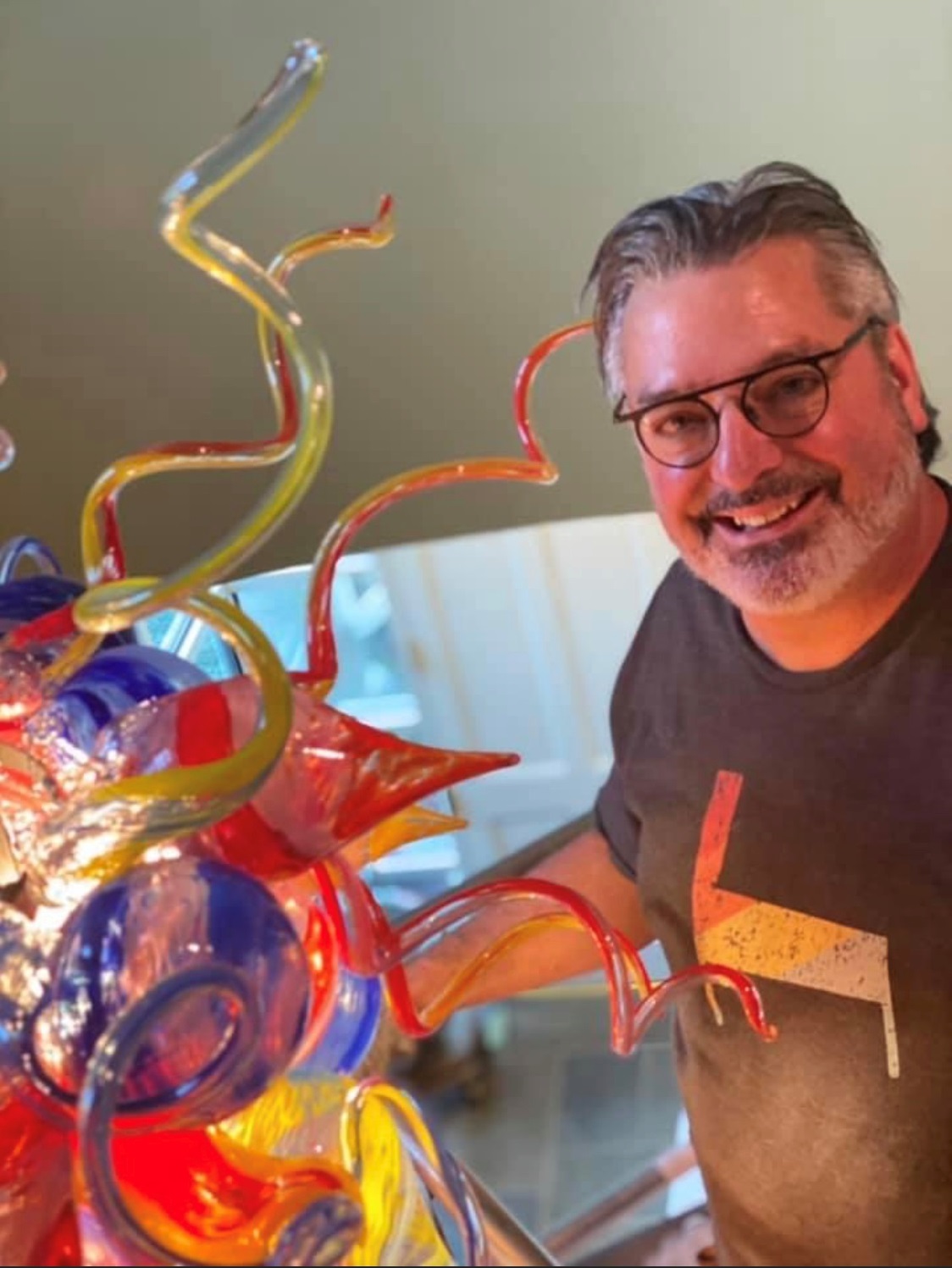 SAAC is pleased to welcome Pine Bluff glass artist James Hayes and his new exhibit “Pâte de Verre” to the Price and Merkle Galleries November 2-29, 2021. There will be an artist’s reception on Saturday, November 6 from 6:00pm-7:30pm.

Hayes’ beautifully colorful exhibit was dreamed up by a recent trip abroad. “I recently had the chance to go to Paris during the pandemic, spend five weeks and travel around Europe. My time and experiences there have inspired this show through color and shape,” he said.

“I discovered glass blowing in 1988 at the Arkansas Arts Center after receiving an art degree from Hendrix College, said Hayes. “Since then, I have been blessed to be able to study glass art all over the world. Glass blowing is my calling in life, my creative avenue for expression. I use nature, chance, fashion, and my emotions as inspiration for my art glass. My art is playful, adventurous, colorful and distinctive. When I make something I always begin with the end in mind. However, during the glassmaking process the design can change.”

James Hayes was born in Pine Bluff, Arkansas where he owns and operates the James Hayes Art Glass Company. After receiving an art degree from Hendrix College in Conway, Arkansas in 1988, he searched for a new medium to express his artistic talent. Three months later, he discovered glassblowing. He has studied glassblowing in Murano, Italy; Columbus, Ohio; and the Pilchuck Glass School near Seattle Washington. In 1993, he bought his own equipment and formed the James Hayes Art Glass Company. In 1996, he purchased a dairy farm and converted the milking parlor into a hot shop and showroom.

James has had numerous solo and group exhibitions throughout the United States as well as one in Hong Kong. One of his most memorable displays was outside at Garvin Gardens in Hot Springs entitled “A Splash of Glass” in 2013. Some of his honors include an invitation from the White House to design a Christmas tree ornament; designing the tree topper for the Arkansas State Capital Christmas tree 2016-2019, and being featured on High Profile in the Arkansas Democrat Gazette in addition to KHTV Channel 11’s “Everyone Has a Story” along with many other news stories. He has been featured in many publications including being on the cover of “At Home in Arkansas” magazine and featured in “Southern Living Magazine”. He has won the Best of Media award at the Shreveport, Louisiana, Red River Revel Arts Festival and Best of Show at Riverfest in Little Rock, Arkansas.

James was given the responsibility for designing gifts for the 2003 Lt. Governors Conference and the design of the 2001 Governor’s Arts Awards in addition to designing ornaments for the James Hayes Christmas Tree in the Governor’s Mansion in 2007. He was awarded the Hendrix College Odyssey Medal in Artistic Creativity for the 2006-2007 year. His most recent award was first place in the Annual Delta Visual Art Show in 2019. The work of James Hayes is available in numerous shops in the Southern region.

For more information, check out his website at www.hayesartglass.com.