“An Hour for the Arts” Fall Lecture Series with Gay Bechtelheimer 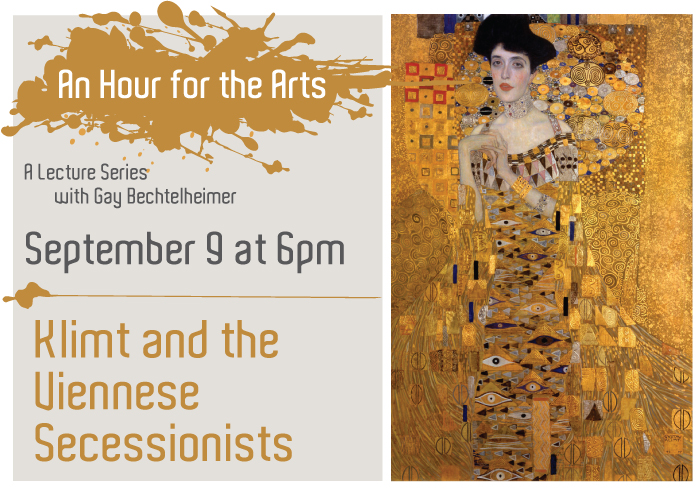 Artist and educator Gay Bechtelheimer will return to the SAAC stage with a fall series of “An Hour for the Arts” lectures, planned to focus on “people’s choice” topics, all suggested by guests at the spring lectures. Lectures will be held on September 9, October 14, and November 11, all at 6:00 p.m.
September’s talk, sponsored by Melinda and Michael Verdesca, will focus on the work and impact of artist Gustav Klimt and the Vienna Secessionists.
“When we asked attendees at the previous lectures about artists whose work they were interested in learning more about, Klimt was the name that came up most often,” says Bechtelheimer. “I was very familiar with his paintings, but when I began deeper research, I was surprised to discover how controversial and provocative much of his other work-and his life-really was.”
Klimt’s work, including his “golden phase” paintings “The Kiss” and “Portrait of Adele Bloch-Bauer I,” is some of the most recognizable art in the world. However, he was often the subject of controversy, beginning with commissioned public art in his native Vienna. Klimt was a founding member of the Vienna Secession, which aimed to provide exposure for unconventional young artists and to bring the work of foreign artists to Vienna, without declaring support for any particular artistic style. Until his death in 1918 as a result of the worldwide influenza epidemic, Klimt continued to push boundaries and work prolifically.
After his death, Klimt’s paintings have brought some of the highest prices recorded at auction, including “Adele Bloch-Bauer II,” which sold for $150 million in 2016. In addition, they are some of the most recognizable works associated with the recovery and restitution of artwork stolen from Jewish families by the Nazis.
October’s “An Hour for the Arts” is sponsored by Cherie and Rudy Bright, and will cover the work of John Singer Sargent. In November, Bechtelheimer will explore the world of Pop Art, sponsored by Mary Pat and Aubra Anthony. Each event will begin with a reception at 6:00 p.m. in the galleries, followed by a multimedia presentation in the theater, and reservations are required to ensure physical distancing can be maintained.
saacarts2021-09-24T17:58:53-05:00August 24th, 2021|