SAAC is pleased to host “One Foot in Reality” by Gulf Coast artists Bill Myers and Diane Stevenson. The exhibition will be on display in the Price Gallery December 1-17 and in the Lobby Gallery January 4 – February 25, with an artist’s reception on Thursday, December 2, from 5:00-6:30 pm. 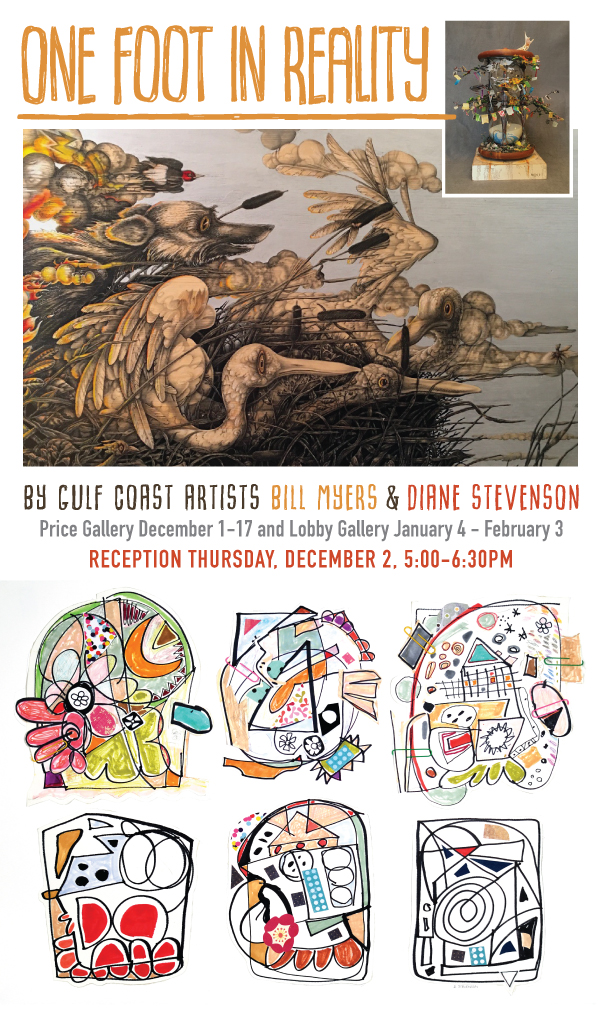 Bill Myers‘ large graphite and ink drawings on board will be shown, along with sculpture in wire, wood and bone. His work has been shown in New York, New Orleans, and Chicago in both galleries and museum shows. Last year he had a one-man show at Lois Lambert Gallery in Los Angeles. Myers has been awarded grants and fellowships from the Mississippi Arts Commission and Artist Fellowships, Inc., and he was named Alumnus of the year at Delta State in 2009.

“I was born and raised in Moss Point, Mississippi into a family where the ‘art’ was oversized head shots of us kids from Olan Mills Studio hovering over the dining room table,” said Myers. “There was a bit of craft from vacation bible school projects; but no other art. A lady in our neighborhood did paint and I would circle my bicycle around when she would be painting outdoors. I was too shy to go up to her; but many years later I did become friends with her. She was in her seventies and me in college, but she encouraged me to pursue my art. My first visit to a gallery and a museum came when I was in junior college and we came on a field trip to New Orleans. I felt that my eyes had been opened. Having not had any art in school, I had my first look at a community where I might find a place for myself.

“I am looking forward to a return trip to El Dorado for an exhibit with my friend Diane Stevenson,” Myers continues. “The exhibit will include collage and drawings by Diane, and I will be showing lighted drawings and mixed media sculpture and drawings. I hope to see old friends there. I have missed the folks of El Dorado!”

Diane Stevenson will be joining Myers in her first exhibition at SAAC. Stevenson has an M.F.A. in poetry and a Ph.D. in American literature from Columbia University and has spent many years teaching. A native of the Gulf Coast, she says her earliest memory of art is looking at a reproduction of Millet’s “The Gleaners,” calling to mind a church hymn, “Bringing in the Sheaves.” Stevenson grew up near the Shearwater Pottery in Ocean Springs, before venturing to New York City.

“I’m mostly a poet, and while living in New York City, I hung out with a younger generation of New York School poets,” she said. “They made poems, and they made collages. These little objects of art were often postcards they mailed one another, a habit, I believe, they lifted from painters. The simple, too simple, answer may be this: poems, like collages, are small. Yet, this is not true of my recent work. They’re big compared to the usual modest scale. When collages do get big, they’re likely to get bumped up into a different category, ‘assemblage’ or ‘construction,’ especially if they’re 3-D and sculptural, but my work, though outsize, and occasionally a bit 3-D, remains, I insist, ‘collage.’

“I’m honored to be showing work with the wonderful Bill Myers, who tells me, as all artists here do, what a terrific place El Dorado is,” Stevenson continued. “Meanwhile, as instructed by Bill, I practice pronouncing El Dorado as natives speak it and not the way it’s spoken in the Howard Hawks Western. Hope I get it right.”