“A Midsummer Night’s Dream” is a comedy written by William Shakespeare in 1595-96. It portrays the events surrounding the marriage of Theseus, the Duke of Athens, to Hippolyta, the former queen of the Amazons. These include the adventures of four young Athenian lovers and a group of six amateur actors (The Mechanicals) who are controlled and manipulated by the fairies who inhabit the forest in which most of the play is set. The play is one of Shakespeare’s most popular works for the stage and is widely performed across the world. The students are presenting a shortened version of “A Midsummer Night’s Dream,” but it is not paraphrased. Every word spoken is written by Shakespeare.

Lynn Gunter, the driving force behind the drama group and co-director of the play said, “SAAC Teen Drama Club exists to provide quality theatre opportunities to area teens. This year we have a student costume designer who is making most of our costumes without a pattern. We also have a student as our stage manager. This is a job that is difficult for even an adult, and she is carrying it out with maturity and responsibility.

“We are performing Shakespeare’s “A Midsummer Night’s Dream” because our teens wanted this challenge. I enlisted the help of Haley Phillips, co-director, because I consider her to be well-versed in Shakespeare. We are also very fortunate to have Hannah Davis as our assistant director who is also very knowledgeable in Shakespeare.

The CAST of “A Midsummer’s Night’s Dream” 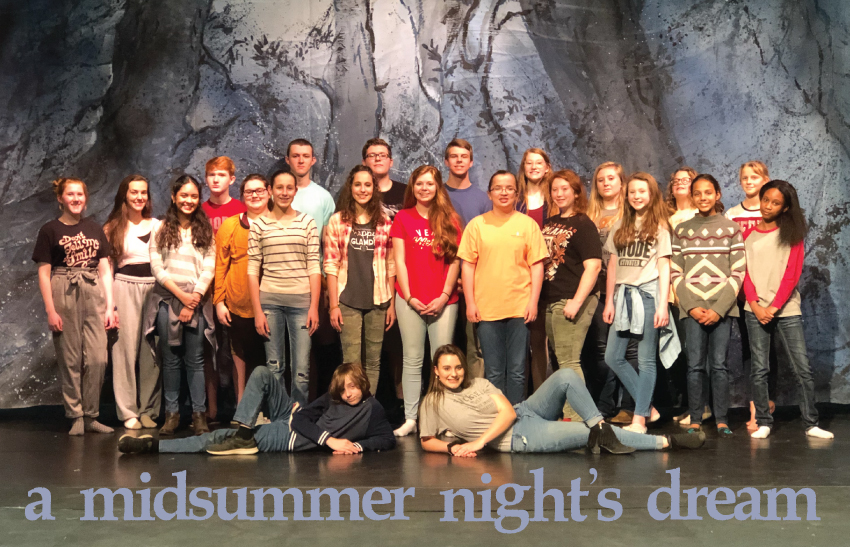 The Teen Drama Club at SAAC is for students in grades 7-12 who are interested in learning how things work backstage for a production of a play or musical, which includes staging, costuming and set design, as well as acting.