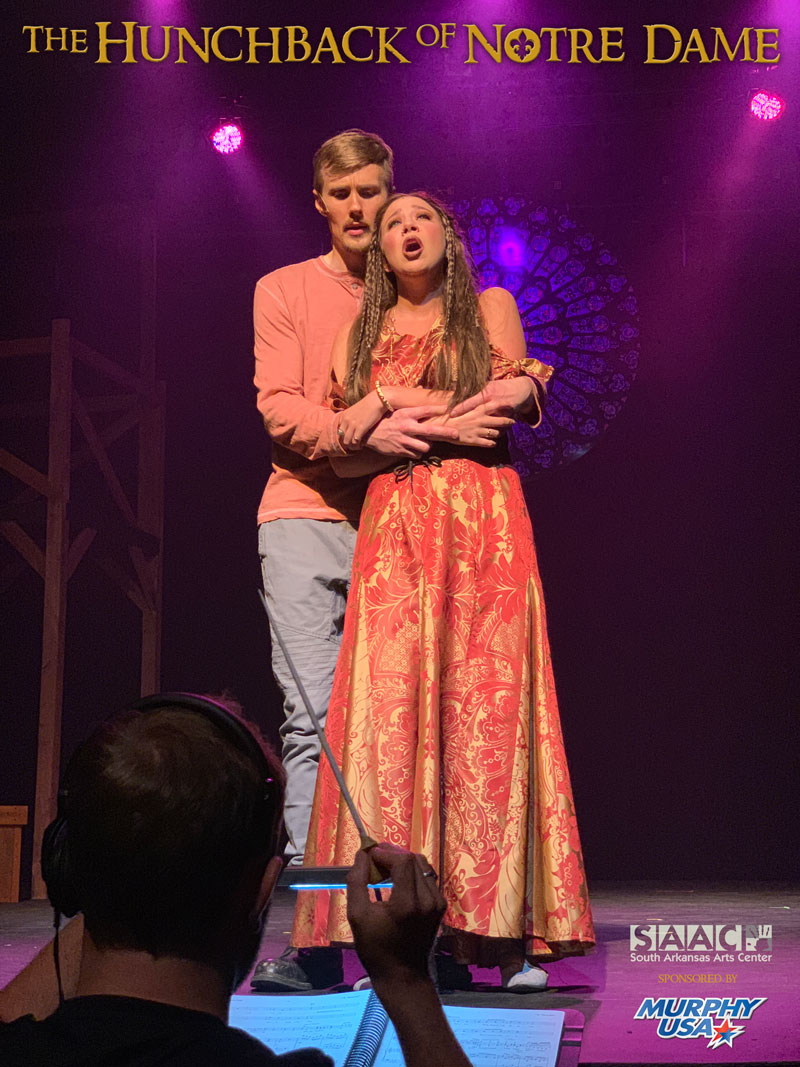 For a theatrical experience that will enchant you, as well as give you goosebumps from the powerful music, you must see SAAC’s production of “The Hunchback of Notre Dame”, sponsored by Murphy USA, before that last bell tolls.

What does one hope to hear when one attends a “musical?” MUSIC, of course! Not just ‘regular every day music’, rather, outstanding music. The kind that lifts you up, the kind that inspires you, the kind that you just can’t stop thinking about. That is what a musical should be. And that is what SAAC’s production of “The Hunchback of Notre Dame” delivers. Thrilling, inspiring and magnificent music, with incredible storytelling along with it.

The stage musical of “The Hunchback of Notre Dame” is based on the classic novel by Victor Hugo, “Notre-Dame de Paris,” as well as songs and plot points from the 1996 animated Disney film. The people of Paris go about their lives under the bells of Notre Dame, where the hunchback Quasimodo sits high above the city in his tower. He meets Esmeralda, a gypsy girl, and falls in love with her. He vies for her affection, along with his caretaker Claude Frollo and the soldier Captain Phoebus. As Frollo’s anger towards the gypsies strengthens, it’s up to Quasimodo to save the day and free Esmeralda’s people. The musical elevates this story into a new dimension with its soaring ensemble musical numbers. It has passion, relevance, and drama, and is full of beautiful, mesmerizing music.

The Hunchback of Notre Dame still stands as a tale of social justice, human kindness, and acceptance throughout generations.

D. Brent Miller, musical director for this production, is enthralled with the score. “The score to ‘The Hunchback of Notre Dame’ is soaring, undulating, epic and deceptive in several ways. The most obvious is that you see the name and think it is totally a Disney score…wrong. Disney tends to candy coat its stories and songs to keep them more malleable to the targeted audience. The crowd will certainly recognize a few songs from the Disney movie, but this is most certainly not the Disney story my generation grew up with. This version is a little more raw and edgy. It will resonate in ways the film never could. The composers and writer kept the stage version much closer to the original novel.”

“As a musician, the thing that most took me by surprise is the stylistic differences in the show between the screen and the stage,” said Miller. “Because the setting is in and around a cathedral, there are some things that you can capture on film that you just can’t recreate on stage, so some adapting had to be done. One of the most noticeable things is the addition of the Cathedral Choir. They are a character unto themselves. They were intended to provide the punctuation to the scenes, while also creating ambient mood music for tender moments.”

Some of Miller’s favorite musical moments during the production are Quasimodo’s rendition of “Out There” and when Esmerelda sings “God Help the Outcasts”. Other outstanding songs are Clopin’s “Topsy Turvy”, Dom. Claud Frollo’s “Hell Fire” and when Pheobus introduces us to a new song, “Rest and Recreation.”

Join the crowds flocking to see this stellar production. The theatre committee at the South Arkansas Arts Center invites you to the summer musical, “The Hunchback of Notre Dame”, now playing through Sunday, July 28, 2019. Tickets are still available in limited quantities through the SAAC box office.