Step 1: Singing/Acting Audition 7:00pm Friday OR 10:30am Saturday Attend Either Session
Lobby opens a half hour before auditions. Fill out an audition form and get a head shot.
Come prepared with a one minute comedic monologue and a song that matches the style of the show. Songs from the show are acceptable. Song must not exceed 2 minutes. Please bring your own accompaniment on CD or device. Audition packets with sides and a song for each character are available. Click on the links below to download the audition packet for each character. All ensemble members should choose a side from a character closest to their type.

10 Character Roles for 4 Women, 5 Men, 1 Boy and Ensemble of Chorus and Dancers
FUN and Open Show that Needs All Physical Types. Dancers, singers, actors, and movers are all welcome. Ages 8 and up are invited to audition.

Need Help? If you need information about auditions, staff will be available in the lobby on Thursday, January 19, 5:00-7:00pm. Stop by to ask questions! Pick-up an audition form! Get copies of the audition sides, music selections, comic monologues that can be used at auditions. And when you are done, slide into the gallery and enjoy the reception being hosted for the Gallery Grand Reopening and Membership Showcase exhibit that is happening on the same night. 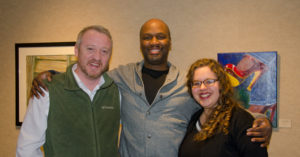 Director and Choreographer MONROE MOORE “This show is one of the most fun, creative, hilarious productions. It gives comedic actors a great canvass to display their comic timing and sharpness on stage, while combining true human emotional emotions with a message that translates to all ages.”
Monroe Moore is an award winning director and choreographer and a member of the Actors Equity Union and Society for Stage Directors and Choreographers. He holds a BFA in Musical Theatre/Speech. Moore has directed, designed, and choreographed over 100 musical productions. He is the Performing Arts Department Head for Camp Lindenmere in Henryville, Penn., and has taught master classes in Musical Theatre and Dance all over the United States. Moore is Executive Artistic Director for Broadway Bound Performing Arts Centre in Houston, Tex.

Vocal Director HANNAH BOWEN Originally from Dallax, Tex, Hannah graduated from Ouachita Baptist University with a Bachelor in Music Education. She currently teaches Music Production at Washington Middle School. She has been involved in theatre and musical theatre from a very young age, and she directed her first show in high school. She has also played several roles including Ophelia in Hamlet, Eliza in My Fair Lady, and Gwendolen in The Importance of Being Earnest. Hannah is especially excited about this show and has loved it ever since she heard the song “Pulled”: as a freshman in college. The crazy and unusual characters in the show capture the imagination as well as entertaining and pulling on our heartstrings at their strangely relatable struggles. The music itself pulls together several genres and is an exciting driving force behind the show. She can’t wait to get started!

About the Script and the Songs

“The Addams Family” features an original story, and it’s every father’s nightmare. Wednesday Addams, the ultimate princess of darkness, has grown up and fallen in love with a sweet, smart young man from a respectable family – a man her parents have never met. And if that weren’t upsetting enough, Wednesday confides in her father and begs him not to tell her mother. Now, Gomez Addams must do something he’s never done before – keep a secret from his beloved wife, Morticia.

Everything will change for the whole family on the fateful night they host a dinner for Wednesday’s ‘normal’ boyfriend and his parents.

The show is based upon “The Addams Family” characters created by Charles Addams in his single-panel gag cartoons, which depict a ghoulish American family with an affinity for all things macabre.

Would You like to have a chance to sing, dance and play a hilariously macabre character on stage? Wouldn’t it be fun to showcase your comedic talents to the world in a hilariously funny play? Your time is now!!

“The Addams Family” is a musical comedy with music and lyrics by Andrew Lippa and a book by Marshall Brickman and Rick Elice. Numerous film and television adaptations of Addams’ cartoons exist, but the musical, which is the first stage show based on the characters, is based upon the cartoons rather than the television and film characters. The show opened on Broadway in April 2010. The original cast featured Nathan Lane as Gomez and Bebe Neuwirth as Morticia.

When brainstorming ideas for the overall appearance of the show, the original director and producer turned to the character of Uncle Fester for inspiration, asking themselves, “If Fester was going to do a Broadway show, what kind of Broadway show would he do?” The partners described the result as “an off-beat take on 19th Century Gothic.”

A copy of the script will be available for review in the SAAC office. For more information call the SAAC at 862-5474.