Cast of Fiddler on the Roof JR 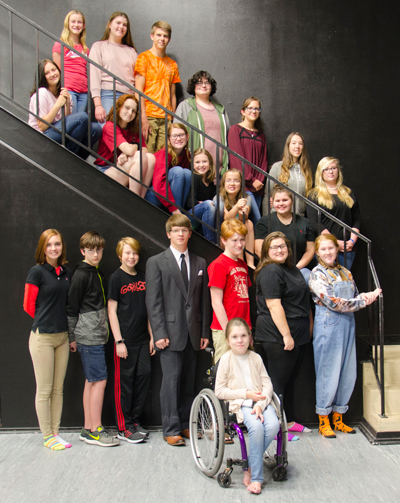 SAAC Arts Academy Drama Club will present “Fiddler on the Roof, JR” on Sunday, December 3 at 2:30pm and Tuesday, December 5 at 7:00pm. This production showcases the talents of the drama students from grades 7-12, and will be directed by Lynn Gunter.

This special adaptation of the nine-time Tony Award-winning Broadway musical, “Fiddler on the Roof JR.”, is set in the little village of Anatevka. The story centers on Tevye, a poor dairyman, and his five daughters. With the help of a colorful and tight-knit Jewish community, Tevye tries to marry off his daughters and instill in them a sense of tradition in the face of growing anti-Semitism in Czarist Russia.

Gunter has announced the cast for “Fiddler on the Roof JR”. Congratulations to these talented students selected to participate in this production. The cast includes Nathan Gunter as Tevye, Emily Williams as Tzeitel, Betsy Phillips as Hodel and Lily Phillips as Chave. Maggie Phillips will play Yente, Walt Phillips will play Motel, Josie Denson will play Golde, Hannah Hickman will play Sphrintze and Maddy Couture will play Bielke.

Musical director for this production will be Cassie Hickman, choreographer will be Stephanie Lowrey, stage manager will be Tracye Couture, sets will be built by Bob Stephenson and costumes will be done by Gary Hall.

For more information about this production, please call the SAAC office at 870-862-5474