It’s a dark and stormy night, and you’ve been invited to a very unusual dinner party where murder and blackmail are on the menu. Each of the guests has an alias, access to weapons, and the host is, well . . . dead. So whodunnit? 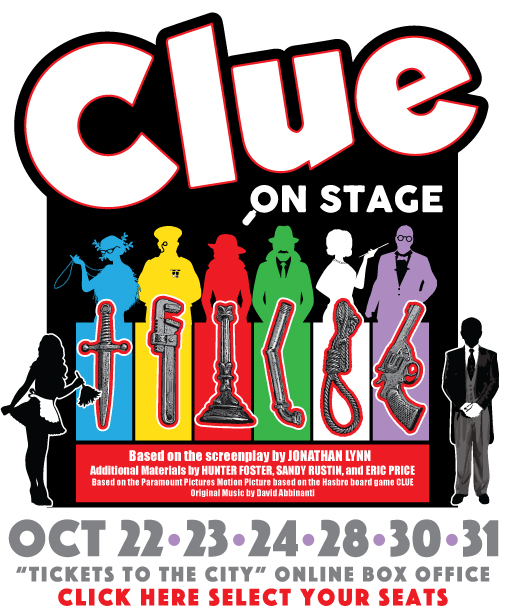 Tickets cost is $5 for students, $10 for SAAC members and $20 for general public and all opening night seats.

Visit the “Tickets to the City” Online Box Office or call the SAAC office at 870-862-5474 to reserve your seats for all showings.

Based on the iconic 1985 Paramount movie which was inspired by the classic Hasbro board game, Clue is a hilarious farce-meets-murder mystery. The tale begins at a remote mansion, where six mysterious guests assemble for an unusual dinner party where murder and blackmail are on the menu. When their host turns up dead, they all become suspects. Led by Wadsworth – the butler, Miss Scarlett, Professor Plum, Mrs. White, Mr. Green, Mrs. Peacock and Colonel Mustard race to find the killer as the body count stacks up. Clue is the comedy whodunit that will leave both cult-fans and newcomers in stitches as they try to figure out…WHO did it, WHERE, and with WHAT!

Kenneth Burns, who plays Mr. Boddy, the mysterious host in the production, said, when asked about his favorite part of the play, “I’d have to say I really like the scene where Colonel Mustard and Wadsworth go through the bit about whether or not ‘there is someone else in this house’. I think the comedic element of the miscommunication is extremely universal to the human condition, in that it highlights just how easily people can miscommunicate even when they are trying to get on the same page. You just can’t help but laugh. If you like comedy mixed in with a bit of mystery, then you’ll want to see this show. This cast is talented, the chemistry is on point and if you’ve never seen this before, you will not regret it!”

SAAC is also hosting a “Colors and Costume Night” on Saturday, October 30 to add a little fun to the show on Halloween Eve. Rhett Davis, director for the production, said, “If you’d like, we’d love for you to come dressed as your favorite character from the game or the movie or come dressed in a solid color showing your support for that character.”