Please Welcome the Cast for SAAC’s production of “Clue: On Stage”!

“We have assembled a very talented and new group of people for this show,” said Rhett. “We have actors with all levels of experience on the South Arkansas Arts Center stage. You will see some familiar faces mixed in with a largely new bunch taking center stage. We had a fantastic group show up to audition and it really has resulted in an incredible cast from top to bottom.”

“Our lead, Hayden, will be having his first experience on this stage and he’s already leaving us in stitches as Wadsworth,” continued Hannah. “Our other six principal characters are all unique and hilarious, as well. Each brings their own form of comedy to the stage. The supporting cast is also incredible, as they really shape and mold the setting as both foreboding and comical. It’s been an amazing process so far, and I can’t wait for everyone to see how phenomenal our cast is. Come join us in October and see how far these characters will go when they’ve been backed into a corner!” 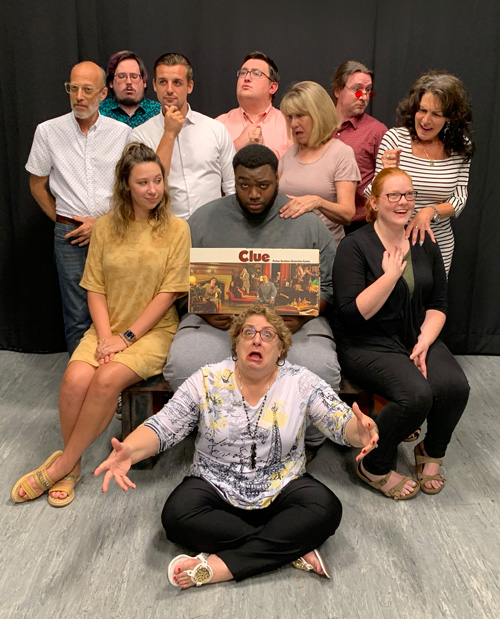 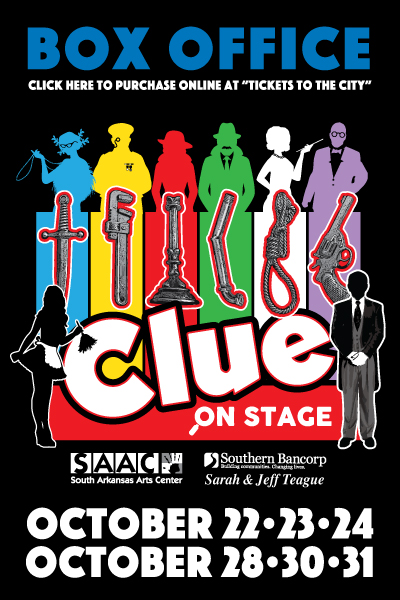 The classic board game is brought to life in “Clue: On Stage”. Six guests are invited to a dinner party thrown by an anonymous host. They are given aliases–Colonel Mustard, Mrs. White, Mr. Green, Mrs. Peacock, Professor Plum, and Miss Scarlet. Though discouraged from revealing personal information, it is soon discovered that all of them have fallen victim to the same blackmailer, their very host of the evening. Each is presented with a weapon and an option: pay their extortionist double, or kill the innocent butler. What follows is a madcap, slapstick evening full of murder, mystery, and laughs as they seek to puzzle out the culprit amongst criminals.

Call the SAAC office to reserve your seats for all showings or click on the box office icon to purchase tickets online at our “Tickets to the City” Box Office.