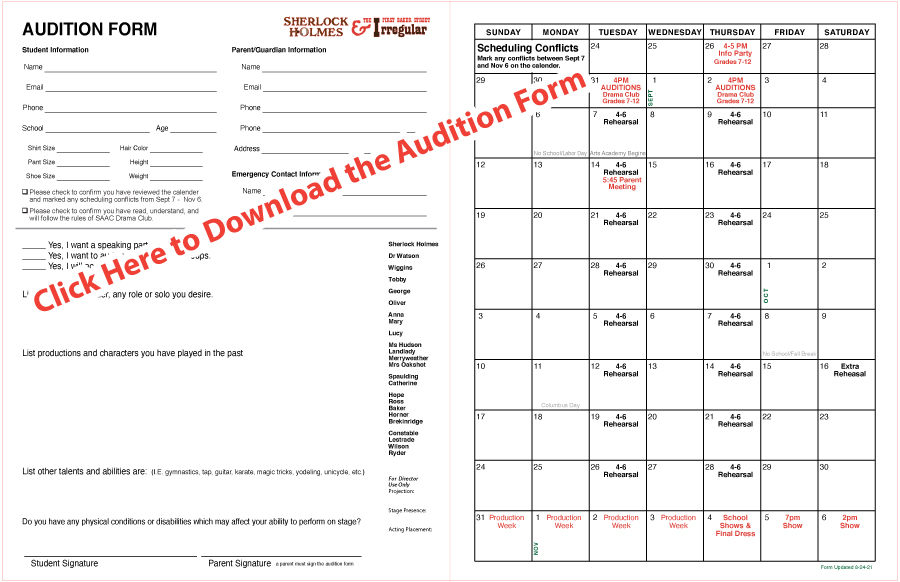 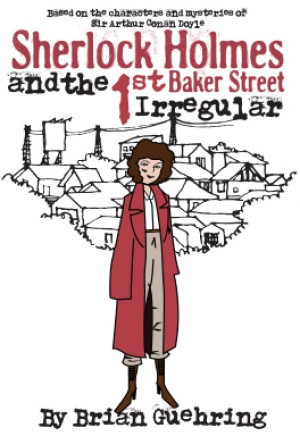 Director Lynn Gunter has selected “Sherlock Holmes and the First Baker Street Irregular”, by Brian Guehring as its Fall 2021 production for students grades 7-12. The previously scheduled Drama Club production of “Disney’s Frozen JR” is “on ice” until 2022.

An Information Party will be held on Thursday August 26, 4-5 pm at SAAC. Audition forms and scene readings for this straight play will be available at the party. Gunter will also be in attendance to answer questions about auditions and characters. Auditions will be held Tuesday, August 31 or Thursday, September 2 at 4pm and you may attend either day. Be prepared to read scenes from the script. It is recommended to review the scenes before auditions, but they do not need to be memorized.

Gunter is excited to begin work on this production. Sherlock Holmes is an iconic character and his adventures are always fun and mind boggling, as well as thought provoking, always making the audience ask the question, “How did he figure that out?”

“Sherlock Holmes and First Baker Street Irregular” is based on the characters and mysteries of Sir Arthur Conan Doyle. On a dare from her fellow street urchins, 14-year-old Wiggins tries to pickpocket a strange old man. Not only is Wiggins unsuccessful, but the old man, who is actually Sherlock Holmes in disguise, manages to take the gold ring that was in Wiggins’ pocket and leave behind a note directing her where to go to get it back. When Wiggins goes to 221B Baker Street to retrieve the ring, she is shocked to find out how much Holmes knows about her based on a quick observation. After Wiggins sees Holmes use the ring to solve a case, Wiggins proposes to work as his assistant. Intrigued by her potential, Holmes agrees to begin training Wiggins on a trial basis, so long as she helps Mrs. Hudson with the chores. Wiggins and Holmes must learn to trust each other as Wiggins and her group of street urchins help him solve two dangerous mysteries: The Red Headed League and The Adventure of the Blue Carbuncle.