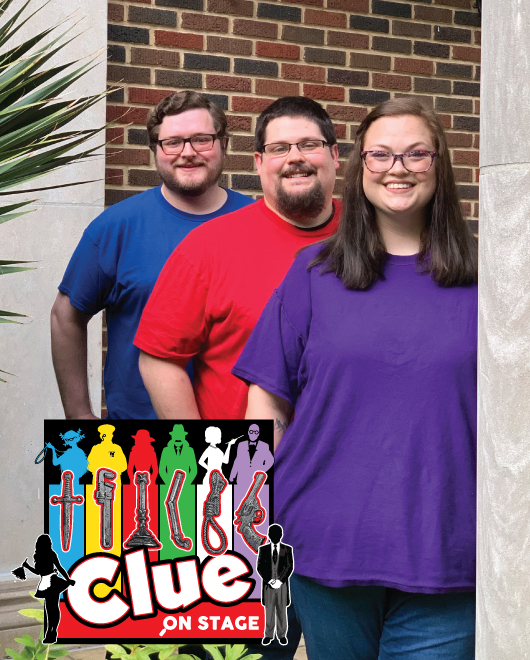 SAAC is thrilled to announce that Hannah Faith and Rhett Davis have been chosen as the directors of “Clue: On Stage,” the SAAC Fall 2021 production. “Clue: On Stage”is proudly sponsored by Sarah & Jeff Teague and Southern Bancorp. Auditions for this spooky, silly, wild ride of a play are August 30th and 31st, with the productions slated for October 22-24, & 29-31. “Clue: On Stage” is based on the screenplay by Jonathan Lynn, and the Hasbro board game you know and love! It is a slapstick, silly whodunnit mystery that is sure to intrigue…and cause some laughs.

Hannah Faith Davis (formerly Johnson) has been around the SAAC as long as she remembers. She was in summer camps as a child, and moved to backstage work in high school. She visited the SAAC while in college for a Bachelor’s degree in Theatre at Louisiana Tech University and was involved with 9-5 and 110 Degrees in the Shade. She graduated from Louisiana Tech University in 2017, and got married to her husband, Rhett Davis, that same summer.

Since being back in ElDorado, Hannah has done many things with the SAAC. She took over the role of theatre class instructor, and has been heavily involved in Teen Drama Club. She has directed three children’s productions with the SAAC; Disney’s Aristocats, Annie KIDS, and James and the Giant Peach Jr. She is also heavily involved with adult theatre at the SAAC, working on 6 shows since 2018-most recently working backstage on Steel Magnolias. Hannah also loves a good mystery, and anything spooky. She can’t wait for you to help come solve whodunnit.

Born and raised in El Dorado, Rhett Davis fell in love with theatre in high school under the tutelage of Delaine Gates at El Dorado High School. It was there that he grew to adore her role and the way it shaped the actions and story told on stage. He performed in many shows at the high school level before going off to college where he also performed on stage. He returned to El Dorado in 2017 when he married his high school sweetheart and fellow director, Hannah Faith Davis, then Johnson. The two of them acted and worked backstage on many shows over the past four years such as 110 in the Shade, Breakfast at Tiffany’s, Peter and the Starcatcher, The Hunchback of Notre Dame, Three Musketeers, and Steel Magnolias.

It was while working on Steel Magnolias and learning many things from Tripp Phillips that he decided to finally try his hand at directing. He is a huge fan of board games, mysteries, and comedies and knew that this was the perfect opportunity. He is excited to put on the directing hat alongside his beautiful wife as they bring you the story of Clue and ask you the question of… Who did it? Where? And with what weapon?

Signing on as assistant director, Jacob George is enthusiastic about all the fun that “Clue: On Stage” has to offer. He has known Hannah Faith and Rhett since high school, where they all met in the theatre department. Jacob is a professional theatre artist, with many professional sound design credits under his belt, and a degree in theatre from Arkansas State University. He is no stranger to the SAAC stage, and is excited to be behind it once again, working with childhood friends.

“Clue: On Stage” is based on the screenplay by Jonathan Lynn, The Paramount Pictures movie “Clue” and the Hasbro board game. Six people are mysteriously invited to a mansion for a dinner party, and secrets begin to be revealed. As the secrets begin to pile up…so do the bodies. Clue: On Stage is an hilarious goofy comedy, with enough mystery and intrigue to keep any audience member thoroughly entertained.

Print a copy of the audition materials.