Famous People by Dr. Moise Menendez in the Lobby Gallery

The South Arkansas Arts Center is thrilled to welcome Dr. Moises Menendez and his inspiring charcoal and graphite works, “Famous People” to the Lobby Gallery. This exhibit, contained in a two part series to be shown back to back in subsequent months at SAAC, is a collection of portraits of luminaries and notable persons throughout history that have inspired and challenged the artist during his life.

A well-known local surgeon, Dr. Moises Menendez hails from Lima, Peru, where he began dabbling in art at an early age. After much success in artistic endeavors as a child, they were eventually set aside when he began attending medical school. His interest in painting and drawing resurfaced many years later and he has enjoyed learning new techniques and painting his family and grandchildren’s portraits.

Menendez has been inspired by this quote from the like-minded famous sports figure, Babe Ruth, who said, “I’ve heard people say that the trouble with the world is that we haven’t enough great leaders. I think we haven’t enough great followers. I have stood side by side with great thinkers – surgeons, engineers, economists; people who deserve a great following – and have heard the crowd cheer me instead.”

Menendez’ goal is to complete at least 50 portraits of notable people and to show the new generation how much benefit they have obtained from the work and dedication of these people such as Pasteur, Marie Curie, Bell, the Wright brothers, Salk, Morton, Edison, Faraday, Pavlov, Florey, and others.

“Most of my career I have been intrigued and amazed about history, especially with people who were discoverers or inventors,” said Dr. Menendez. “History is important because it allows us to understand our past, which in turn allows us to understand our present. In 2012, I decided to start a series of portraits of people who have contributed to society through their work. This exhibition of famous people is part of history and those people should be honored and imitated. They were as human as the rest of us with similar desires, goals, defects, qualities, values and so on. Most of them fought for their beliefs and did not give up despite the negative circumstances.” 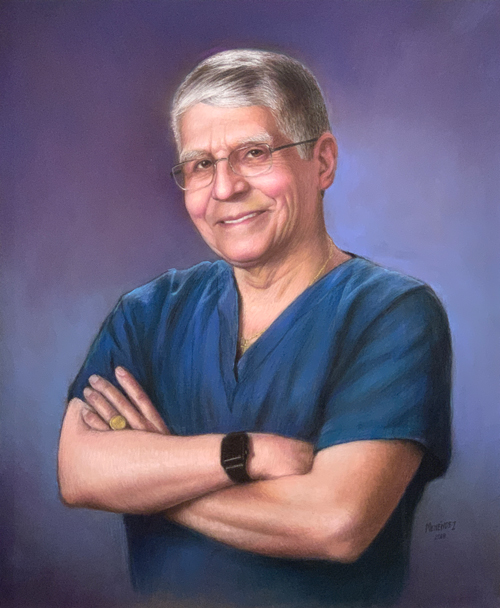 My name is Moises Menendez, originally from Lima, Peru and I am a doctor, general surgeon. I also I consider myself an amateur artist, since I never had a formal education to become a professional artist.

My early beginnings with art started when I was very young, around six or seven years of age. I loved to draw horses, trains, airplanes, and whatever was available with my pencils and paper. Then a few years later I noticed I was able to draw people, and my desire to do portraits grew. In fact, I remember drawing the face of my grandfather, the image of Christ, and my uncles, but I do not recall drawing my parents.

My early years were consumed struggling with poverty, although my father was able to support all of us within his limitations. I remember those days when my mother had to ask money of my grandfather to put some food on the table. These situations happened very seldom, but I have vivid memories.

My parents saw the potential that I had to become an artist, but due to economic reasons, I continued to practice my drawings without any formal guidance until I attended high school. In public school art lessons were given, and in order to find a potential artist, we were told to draw whatever we could. I recall very well that I depicted the image of a fighter jet with propellers taking off vertically. My skills improved in a few months. The news spread about my potential to the point my father took me to an exhibition of a famous European artist who happened to arrive in Lima for a show. He loved to paint Inca costumes and the history of the Incas. His name was Kristian Krekovic from Croatia.

Since my father worked at the City Hall where the exhibition of this artist began, he took me there and told me to copy one of the artist’s work. Since I was a little kid, I obeyed my father and I started to draw. When the artist learned about this situation he looked at me and said how long have you been painting, asking me questions related to my drawing. The media came and took pictures and wrote a biography about me and the artist. The next day on the front page of one the papers proclaimed “Artist discovered a prodigious child”. In fact, both the artist and his wife wanted me to go to Europe with them. My father said yes! Of course, my mother said No!

I became very popular in the school and neighborhood, to the point the mayor of Lima appointed a special artist to teach me and this was all paid by the city of Lima. I attended the art classes of this art teacher, but to my disappointment he was a mediocre artist and also did not teach me anything, to the point I told my parents I was wasting my time going to his classes. He was paid well though.

However, there was an Art Contest for all the schools in Lima, and it was sponsored by the main School of Art of Peru. I was considered the Absolute winner, since I was able to complete two figures using vine charcoal when most of the contestants were still working on the first work. The Dean of the Art School asked my parents to ask the other artists at what level I was able to attend that School. I was too advanced to start from the very beginning and I could start at least two cycles or years ahead. However, there was a problem: at that level only nude art was offered. Because of my youth my parents declined.

Years later my enthusiasm for art declined. I finished High School and I was lucky to go to Medical School, and the rest is history. My experience with art in high school until my arrival in the US spanned several decades. A luck of fortune happened to me in the early 90s when talking to a friend of mine who currently lives in Costa Rica. I told him my story, and he encouraged me to re-start my art. I said fine, I will try, but this time it has to be with some guidance.

Since I met Jorge Villegas in El Dorado, I asked him if he could give me a few lessons especially doing oil painting. In fact, I started doing oil and drawing charcoal as well and did several works including self-portraits and a portrait of my wife, Peggy. On Sundays we gathered a group of enthusiastic artists at the SAAC and we paid a model to pose.

I also attended workshops, purchased many books, videos and continued painting sporadically, until 2005 when my first granddaughter Kate was born. My interest in drawing and painting increasingly developed, and I did several paintings and drawings of my grandchildren. I have been able to see their growth through my art.

I continued my practice and painting using pastel, and this medium became my favorite since it is easy to manipulate and no blending is needed and put aside oil painting for a few years.

In 2012 I attended a workshop in Fort Worth, Texas offered by a famous artist, J.D. Hillberry, who showed me how to use the basic principles of drawing and the use of graphite and charcoal pencils and also the use of erasers, composition, values, etc. At that time, I realized I was not well aware of basic principles of drawing and especially the knowledge of the tones or values. I purchased videos and books and accumulated more information about the subject and my enthusiasm for art in general increased since my confidence improved with these basic rules.

After I attended that important workshop in 2012, I decided to start a series of portraits of people who have contributed to society for their work such as scientists, doctors, humanists, and so on. I started with the portrait of the French artist and scientist, Louis Pasteur, then continued with the rest of the luminaries. My goal is to complete at least 50 portraits of notable people and to show the new generation how much benefit they have obtained from the work and dedication of these people such as Pasteur, Curie, Bell, the Wright brothers, Salk, Morton, Faraday, and others.

The idea of portraying these people is to merge the artistic aspect of the work and at the same time describe the work they did for the benefit of society, either in Sciences, Philanthropy or humanity. Many of the individuals depicted in these works could be as a role model for the young generation.

They were human as the rest of us with similar desires, goals, defects, qualities, values and so on. Most of them fought for their beliefs and did not give up despite the negative circumstances. The value of history in general is that it never changes, and the young generation should learn from those people and always keep them in mind.

The use of drawing using either charcoal or graphite is ideal for this collection at least in my personal opinion, since the reference photos are mostly in black and white and they can be done more rapidly than other medium. There is also the uniformity of the medium that makes black and white perfect.