Five Star Results for the Production Staff of “Sunset Boulevard” 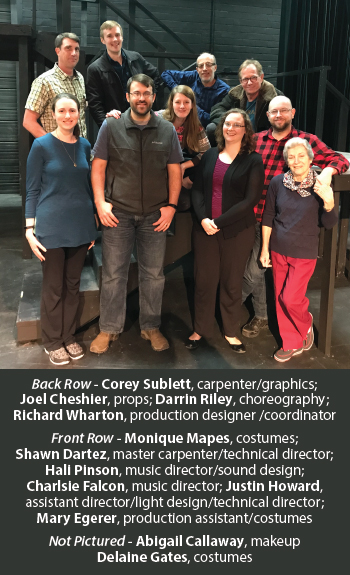 Behind the scenes the production staff has worked overtime to make the spring musical production of “Sunset Boulevard” a memorable theatre experience for the audience. Countless hours have been put in by the production staff, with so many facets to be tended to…set design and construction, lighting, costumes and music, as well as hair and makeup. It takes a small army of people to pull off the work that accompanies any production, and most of the hard work at SAAC is done by volunteers.

“Sunset Boulevard” is well known for its stylized set, and that fact proved to not be a problem for production designer, Richard Wharton, who has been obsessed with the movie his entire life. He and his crew of set builders, including master carpenter Shawn Dartez and Corey Sublett, have brought to this stage design a very interesting way for the audience to be able to see the everyday workings of a soundstage. Wharton said, “Basically, we are using a movie studio soundstage to tell this many layered story. We are literally pulling back the curtain, and the audience will see the process and wonder if Norma’s world is based in reality or fantasy? The audience is also asked to believe this simple set itself is playing many roles: Norma’s mansion, Schwab’s Pharmacy, Paramount Studios and Sunset Boulevard itself winding through all of Hollywood.” Wharton, a self -confessed super fan of the movie added, “At any moment of the day, I am any one of the lead characters.”

Assistant director Justin Howard is also in charge of lighting the stage and he said, “The lights are a character in themselves for this production. With the set being abstract yet minimal, and many of the soft goods removed to make the audience feel as if they are on a sound stage at Paramount, the lights will be telling the story right alongside the actors and music while being completely visible to the audience, whereas with many productions they are hidden.”

Hali Pinson is enjoying her job of music director and sound design. “Every sound effect has to be very accurate to the time period in order to preserve the authenticity of the piece and meld with the design of the set, lights, props, etc. This means that a lot of the sounds I will have to create myself (versus; pulling sounds from archives or other sound effects websites that are pre-made) in order to stay true to the vision of every one on the production staff.”

Costuming is an integral part of any production and recent Louisiana Tech theater graduate Monique Mapes, head costumer, said of her job, “I’m a traditionalist in that I’m staying true to the original musical look. I want a fun, flirtatious feel with the sophisticated look of old Hollywood.” Norma’s look is very iconic in this show and Monique has a vision for her outfits. Along with Diana Hunt and Susan Smith, who are assisting with some of the costumes, they will outfit Norma in her unique style.

SAAC is blessed with many volunteers who give their time and efforts to help each production be the best it can be, and this production team has well exceeded the expectations for this show.