Norma Desmond is in the house!

SAAC’s much anticipated spring musical, “Sunset Boulevard,” has Norma Desmond lovers all a twitter! If you’ve always loved the movie, the musical version will thrill you, as well.

An old Hollywood classic, “Sunset Boulevard” has continually been included in the Top 10 Movies of All Time list. The score for this musical version of that timeless movie was written by the famous Andrew Lloyd Webber, creator of some of the most well- loved Broadway musicals of our time, such as “Evita”, “Phantom of the Opera”, “Cats” and “Jesus Christ, Superstar”. 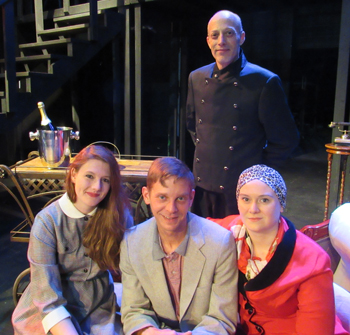 This show focuses on four main characters, including Norma Desmond, and how they all play a part in her life. Also starring in this production are Thomas Brewster as Joe, Hali Pinson as Betty, Darrin Riley as Max and a host of talented singers, actors and actresses playing any number of roles in the ensemble cast.

One of the most intriguing points about this production is that this is first time two actresses have been cast with equal billing in the leading role on the SAAC stage. The iconic role of Norma Desmond, the washed up actress who desperately wants her old life back, will be shared by Tracey Wilson Rice and Charlsie Falcon, both of whom have graced the stage at SAAC in the past.

There are many facets to role-sharing and both of these women playing Norma Desmond have different views on the character, as well as different strengths and experiences that they bring to the performance. Tracey is older, an experienced and degreed dramatic actress and singer and Charlsie is a younger, classically trained singer. Their differences become obvious immediately, but they are both committed to bring their best Norma to the stage. 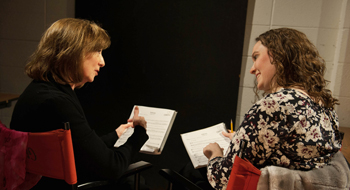 When asked why they sought out the role of Norma Desmond, Charlsie said, “I have seen the movie a bunch of times and I just fell in love with Norma Desmond. Her character is so interesting. Most of the time with characters, an actress gets to show a few emotions, but with Norma, she has EVERY emotion.” Tracey added, “I have watched “Sunset Boulevard” for at least twenty years, and the movie is one of my favorites. Charlsie and I definitely have an age difference as women. I can relate to Norma—the feeling that you have getting older and having younger people come in and replace you, not being able to be the person you once were. You still feel like that person, but people don’t see you as that.”

Tracey went on to say, “This is a return to the stage for me. One of the most beautiful songs Norma sings is when she goes back to Paramount Studios. I know how she must feel, coming back to my home of 20 years, the SAAC stage. I am living in Little Rock now and have a full time job there. I so wanted to play this part, so my very supportive husband is driving me back and forth to SAAC for rehearsals!”

Gary Hall is directing this show and is thrilled to have two fantastic actresses to work with as Norma, offering them both the freedom to be ”their own Norma.” Hall said, “You’ve got the same notes, the same lines, and everything else is basically the same, but you end up with two completely different interpretations of it. And, to me, that’s the magic of acting. You take everything you have and put it all together and it’ll be the same and not the same. Charlsie will bring a more youth-oriented defiance to Norma, and Tracey’s Norma will be coming from a place of more experience. So, depending on what night you see the show, you will see a different Norma onstage. It would be great to come two nights and see the differences!”

Hall went on to say, “This role sharing makes for an extra amount of work for our ‘Joe’ in this play, played by Thomas Brewster. He has had to learn to respond in his acting to both Normas, and he has done an amazing job with it.”

Gloria Swanson’s portrayal of Norma Desmond is one of the most memorable in movie history. Everyone seems to remember her crazy eyes and quirky fashion sense. And who doesn’t remember Carol Burnett’s portrayal of her in countless skits on her variety show? Norma is a larger than life character, making playing her somewhat of a challenge, and many actors will dream up a “backstory” for their character, so that they have a feel for what she has been through in her life. Tracey explained, “A character has lived a life before the moment you see them on stage. I have to know what brought them to this point. How did her childhood affect who she is? I develop a storyline in my head that brings her up to that point in her life. An actor has to have an idea about that to know how she would react to certain circumstances.”

The Andrew Lloyd Webber musical score of this production is multi-faceted as well. He relies on “motifs”, which is a trick in the music world to get the audience to recognize a character by the music that plays when he/she is on stage. Charlsie explained, “The ensemble cast is such a huge part of this production. They really create the Hollywood atmosphere- the chaotic, frenzied world of trying to make it in Hollywood. Their music portrays that high energy feeling, young and energetic. Norma’s music is very broad and dramatic, just as she is. Betty’s music is beautiful and lilting, as she is not jaded by Hollywood as of yet. And Joe’s music is jarring, unsettled and uneasy.” The whole cast agrees that they could not have pulled off this level of success without the hard work of the ensemble cast, playing anything from stage hands, writers, and directors, to sound techs and cameramen.

The box office is open for tickets and reservations. Prices for tickets are $5 for students, $15 for SAAC members and $20 for general public. Red Carpet Nights are $25 for all adults.