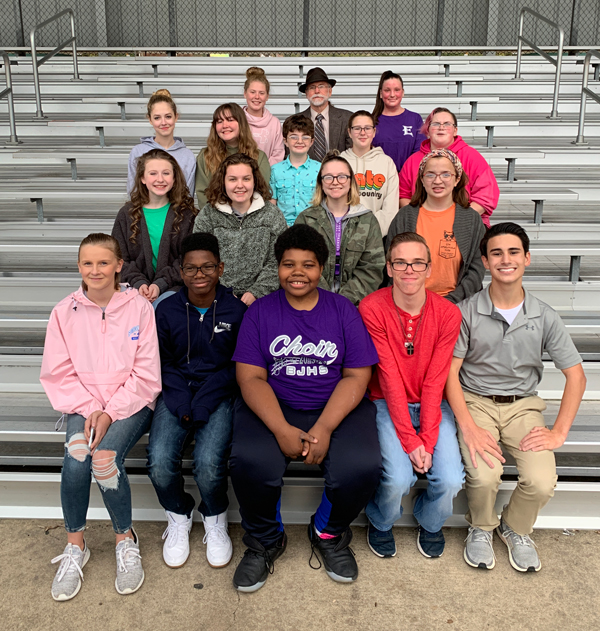 The Teen Drama Club is pleased to announce the cast for the upcoming production of “Our Town” scheduled for December 13 and 14, 2019.

A landmark in American drama, Thornton Wilder’s Pulitzer Prize-winning “Our Town” tells the story of a small town, Grover’s Corners, New Hampshire. Narrated by the character of the “Stage Manager”, the play follows the Gibbs and Webb families, residents of Grover’s Corners, through twelve years of life changes. Through the young lovers Emily and George, their strong and loving parents, and the many other Grover’s Corners’ locals, Wilder delivers universal truths about what it means to be human. With humor, wit, and exceptionally powerful storytelling, “Our Town” offers a unique opportunity for audience members to make precisely that realization.

Lynn Gunter, director, originator, and driving force behind the Teen Drama Club said, “This is the hardest play I have ever directed. Wilder’s strict instructions were for this play to be performed without sets and props. All of our acting and directing ability will be laid bare, with no fancy sets or props to cover us up.

“Every actor is pushing themselves to learn more, do more, display more. I truly believe each of these young people will be on a different acting and performance plane than they were before we started. Aside from the acting challenges, ‘Our Town’ is full of life messages and truths. These are easily applied to the personal lives of our cast members, but we hope the audience will hear and embrace them as well. In fact, we have some especially creative ways to open and close the show to ensure just that. What are they? Hmmmm… Guess you’ll just have to come see for yourself.”

The cast includes four young actors playing the role of the Stage Manager, who is the narrator for the show. Mary Claire Parker will play the main stage manager, while the assistant stage managers will be played by Lillian Fife, Maggie Ragan, and Kale Dugal. Gunter explained that Wilder’s narrator in the play had so many lines to memorize, pages and pages of them, that she broke the role up among the four to make it more interesting and fun for the kids.

Along with students being able to act on stage, students also had the opportunity to be a part of the production backstage. The production crew consists of Mason Halstead and Caleb Lee as the student stage crew.