“Singin’ in the Rain” is a show for everyone! It’s just fun!

The dog days of summer are upon us. It’s hot. It’s steamy. It’s unbearable. SAAC has the answer with its summer musical, “Singin’ in the Rain”! Come get some summer relief and be totally entertained by a cast of incredibly talented singers, dancers and actors who will tap dance their way into your heart.

“‘Singin’ in the Rain’ is a show for everyone! It’s just fun!” said director Lisa Newton. “It has dance numbers that will wow you, really good vocalists, technical aspects that you will talk about afterwards, and it all appeals to a wide audience range. You can bring everyone from the grandparents all the way to the little kids, because even if the kids don’t know the story, there is plenty for them to enjoy. You have the archetypal actors—the mean girl, the sweet girl, the comedic guy, the handsome lead guy, the big producer who is sketchy, the over-dramatic director character, and the great ensemble characters that are in and out of this world.”

“It is very cool how this season at SAAC has tied together so well, with ‘Sunset Boulevard’ and ‘Singin’ in the Rain’ both being about the advent of “talkies,” said lead actor Alex Jeffery, who also brought his professional filmmaking skills to SAAC, filming a silent movie called “The Dueling Cavaliers” to be shown in this production.

Newton added, “One of the really interesting things is that ‘Sunset Boulevard’ was about the death of the silent films, but it didn’t have a happy ending, where ‘Singin’ in the Rain’ is the happy ending that ‘Sunset’ missed. This really did happen in Hollywood where a lot of actors did lose their jobs because they did not have the skill set to actually act when the talkies came along.” 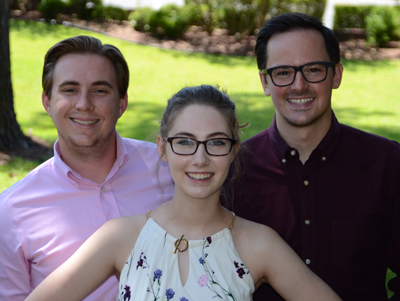 The ensemble cast has been busy working on the songs and tap dance moves that are the highlight of this show. The actors playing the three main characters, Jeffery, who plays Don Lockwood; Brandon Wallace, who plays Cosmo Brown; and Laura Purvis, who plays Kathy Seldon; are tapping their toes nightly to learn something none of them had ever attempted before being cast in this show. According to Jeffery, it’s not been easy, but they all have loved learning a new skill to add to their resume.

“We were all a little terrified about the tap dancing at first,” said Jeffery. “But Hannah Marsh, the choreographer, is a pro and is super patient and is coming at the process from a professional standpoint. She told us the first night that she would make us all confident and make us look good by show time, so that took some of the pressure off of us.” Wallace added, “Knowing we were going to have to tap made me want to be in this show more. It’s something I’ve always wanted to learn.”

Jeffery, Wallace, and Purvis had never met nor worked together before this show, but have formed a comfortable bond with each other since rehearsals began. Both Jeffery and Wallace have spent many hours gracing the SAAC stage in different productions. Purvis is new to SAAC, spending the summer in El Dorado with her grandparents, while spending the rest of her time studying music education with a vocal emphasis at college in Texas. She said, “The people here at SAAC are really welcoming and truly have a love for the arts, so it’s easy to fall in step with everyone here.” 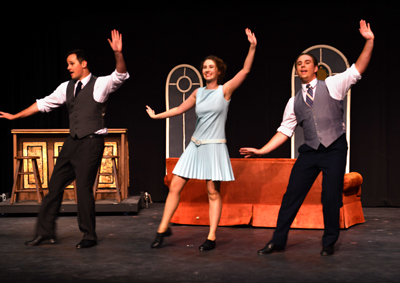 When not rehearsing on stage, the trio can be found practicing their tapping in the ballet room or working on songs together. “Singin’ in the Rain” is a show that focuses on singing and dancing, as well as acting, and they are all three very accomplished singers. Tying it all together with the dancing and acting is keeping them on their toes. They are all very excited about the dance number for ”Good Morning,” in which they actually have to tap dance onto a sofa and flip it over as they cross it. This dance has taken many hours to perfect and is a highlight of the film, as well as the musical.

While talking about his character, Cosmo Brown, Brandon said, “I’ve never played a Cosmo Brown type – a comedic character. His funny side, personified by his song “Make ‘em Laugh,” shows how good a friend he is to Don. I love that song—and it’s a very hard song to dance—and I’m really looking forward to doing it for everyone.”

Charlsie Falcon, who is the music director for this production, has had the task of helping Hali Pinson, a trained vocalist, learn to sing badly for her character, Lina Lamont. Falcon said , “I think everyone will love these character pieces. Lina is a very beautiful silent movies star with a terrible voice! Hali has done a great job with this!” She also has been extremely impressed with the ensemble and how quickly they have learned the songs and dances in this primarily dance musical. A standout moment for her is the song “You Stepped Out of a Dream.”

This classic Hollywood musical will run in the Callaway Theater on July 12-15 and 18-22.