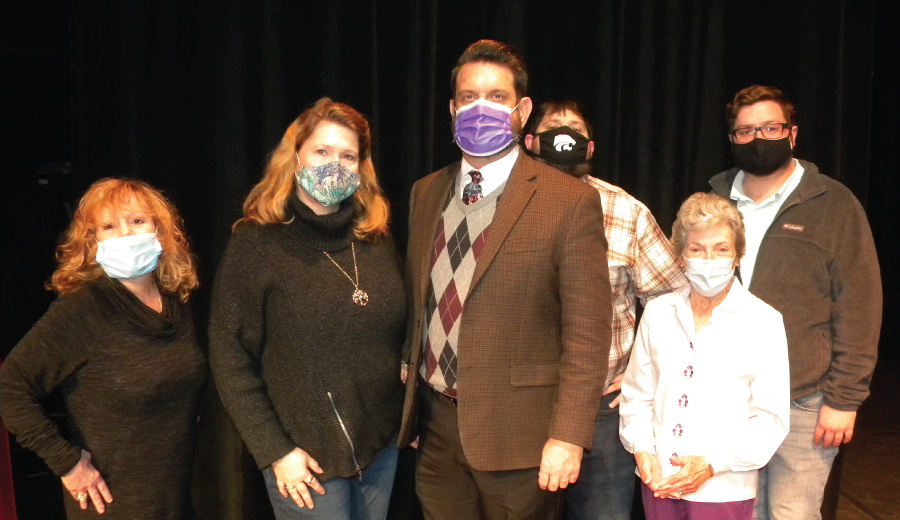 A small but mighty group of South Arkansas Arts Center theatre veterans have come together to stage a live production of A.R. Gurney’s classic play, “Love Letters”. The limited-run production is for December 18-20, with seating limited to 50 guests per performance to meet physical distancing requirements.

The show features only two actors on stage throughout the performance. Abby Cate and Greg Oden will star as lifelong friends and sometime lovers Melissa and Andrew. Seated across the stage from one another, they read letters from throughout their decades-long relationship. Both Abby and Greg are familiar names and faces to everyone in the South Arkansas creative community. Abby, who has appeared on the SAAC stage dozens of times over the years, makes a memorable impression whether she is in a starring role or supporting character. Greg, who got laughs at SAAC most recently as part of the “talking picture” in “Singin’ in the Rain”, is an accomplished musician and choral director.

Longtime theatre veterans Marsha Antoon and Mary Egerer are leading the production as directors. Marsha, who most recently appeared in “Three Musketeers” has also directed multiple productions. Mary, who can best be described as a founding mother of the SAAC theatre, is truly a jack of all trades, from singing and dancing to designing costumes and painting sets.

Rhett Davis is lending a hand as assistant director, and Jacob George as technical director. Rhett, who also appeared in “Three Musketeers”, finds creative inspiration both on stage and backstage. Jacob has served as the sound designer for many productions, including “The Hunchback of Notre Dame”, and took the stage most recently as Snoopy in “You’re a Good Man, Charlie Brown”.

Each of these players is volunteering their time to this project in an effort to boost the morale of the area’s theatrical community during the difficult days of the COVID-19 pandemic. The restrictions on performances and audience capacity have presented a mighty challenge, but this team has diligently worked within the health department guidelines to create a safe and engaging opportunity for the audience, no matter how small.

To ensure social distancing, the performances are limited to 50 tickets, which must be reserved. For tickets click on the box office link below or by calling 870-862-5474. Face coverings are required.