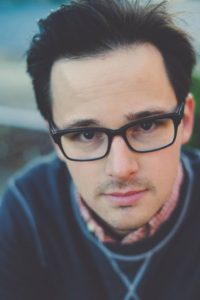 SAAC is proud to announce Alexander Jeffery as the director for the fall production of “Breakfast at Tiffany’s”. This full length drama will take the audience through love and the power of human connection.

“Breakfast at Tiffany’s” is Jeffery’s first time directing a play at the South Arkansas Arts Center, but he is no stranger to the stage. From the age of 15, Jeffery has been performing on the SAAC stage. While in high school, he was seen as the Prince in Rodgers and Hammerstein’s “Cinderella”. His most recent SAAC stage production was Shakespeare’s “Twelfth Night”.

Born a Canadian and raised an Arkansan, Jeffery says both “Eh?” and “Y’all.” He attended the University of Nebraska where he earned two degrees in Theatre Performance and Film and New Media. Jeffery returned to El Dorado in 2014 to star in “Les Miserables”. Since returning home, he has made several short films locally, including the award-winning “Bespoke Tailoring of Mister Bellamy” and “Memoir”. Along with directing films, Jeffery co-founded the annual El Dorado Film Festival. His love for acting makes his approach to directing performance-driven, and will give the actors artistic choices and discussions throughout the rehearsal process
.
“Breakfast at Tiffany’s” is widely known for its famous film adaptation starring Audrey Hepburn. The stage production, while it clearly resembles the movie, will stick truer to Truman Capote’s novella, written in 1958. Jeffery says, “I love this stage adaption because it lives more in the grey area of relationships than the film does. It’s less of a love story and more about the impact human beings can have on our lives. Capote’s sharp wit is ever-present in the material, creating memorable characters and metaphors that define them. I look forward to creating a fun night of theatre that takes audiences on a journey through the mind of one of the greatest American authors.”

For more information about “Breakfast at Tiffany’s”, please call the SAAC at 870-862-5474. SAAC is located at 110 East Fifth Street, El Dorado Arkansas.