Welcome to our new instructors!! 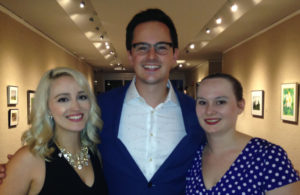 SAAC welcomes three new instructors for classes at the Arts Academy. The new instructors are Charlsie Falcon, voice and beginning piano, and Alexander Jeffery and Emily Cole, children’s drama for children up to sixth grade. Arts Academy classes run during the semester and are held after school at SAAC.

Charlsie Falcon is a choir director at the Smackover and Norphlet School District. She graduated with her degree in Vocal/Keyboard Music Education at Southern Arkansas University in 2014. Falcon has been singing in choirs since she was a freshman at Camden Fairview High School, and has dedicated herself to the art since then. Falcon also studied voice at the Salzburg College in Austria, and has enjoyed being a part of performances such as The Wizard of Oz and The Pirates of Penzance here in the Callaway Theater. Currently, Falcon is a member of the choir at First Presbyterian Church in El Dorado. She hopes to continue making beautiful music, and to help inspire others to find the joy of making music.

Born a Canadian and raised an Arkansan, Alexander Jeffery has made several short films, including the award-winning “Bespoke Tailoring of Mister Bellamy” and “Memoir”. Jeffery attended the University of Nebraska where he earned two degrees in Theatre Performance and Film and New Media. His love for acting makes his approach to directing performance-driven. He believes there is no better way to learn a craft than to teach it to others. His joy for teaching stems from a long lineage: his mother, a teacher and his grandfather, a principal. He loves working with kids and sharing his passion for the arts.

El Dorado’s own Emily Cole has been on the stage since she was 7 years old. Most of her spotlight experience began with singing, but over the years she developed a love for acting. Cole has a bachelor’s degree in journalism that she obtained at the University of Arkansas in Fayetteville, where she resided for several years before coming back home to her roots. She has played characters such as Fantine in “Les Miserables”, Dolly Parton in “9 to 5”, and Viola in Shakespeare’s “Twelfth Night”. She loves working with kids and is looking forward to an exciting semester.