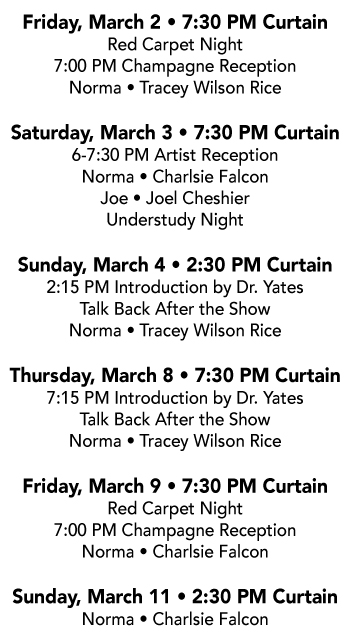 The box office is open for ticket sales for the upcoming production of the Hollywood classic, “Sunset Boulevard”. This show will run March 2-4 and March 8-9 and 11, with the curtain going up at 7:30pm, except for the Sunday performances at 2:30pm. Ticket prices are $5 for students, $15 for SAAC members and $25 for the general public.

A “Red Carpet Night” reception is planned for both Friday nights during the play’s run, March 2 and 9. The champagne reception will also feature light hors d’oeuvres and will begin at 7:00pm. Tickets for the “Red Carpet Nights” are $25 for all adults.

A beloved Hollywood classic, “Sunset Boulevard” continually makes the list for Top Ten Movies of All Time. Andrew Lloyd Webber’s musical rendition is also one of the most popular scores written during his composing career on Broadway, making this an unforgettable and must see musical. Director Gary Hall said of this production, “I’ve never worked on a musical with as much depth in the characters. This has been very exciting for me to be able to get this level of acting out of these four main actors.”

This season’s production of “Sunset Boulevard” boasts an interesting twist- two local actresses will be sharing the role of the female star, Norma Desmond. SAAC stage veteran Tracey Wilson Rice and SAAC voice and piano teacher Charlsie Falcon will be lending their talents to the character of Norma on different nights. Tracey will be playing the part on March 2, 4 and 8 and Charlsie will take her turn as Norma on March 3, 9 and 11. Joel Cheshier, the understudy for Thomas Brewster, will perform the role of Joe Gillis on Saturday, March 3.

Also during the run of the musical, SAAC will host a Talk Back with Dr. Yates on Sunday, March 4, and on Thursday, March 8. Yates will be on hand fifteen minutes before curtain on those dates to provide a brief introduction and moderate a Talk Back with the cast following the performance.

In her mansion on Sunset Boulevard, faded, silent-screen goddess, Norma Desmond, lives in a fantasy world. Impoverished screen writer, Joe Gillis, on the run from debt collectors, stumbles into her reclusive world. Persuaded to work on Norma’s ‘masterpiece’, a film script that she believes will put her back in front of the camera; he is seduced by her and her luxurious life-style. Joe becomes entrapped in a claustrophobic world until his love for another woman leads him to try and break free with dramatic consequences.