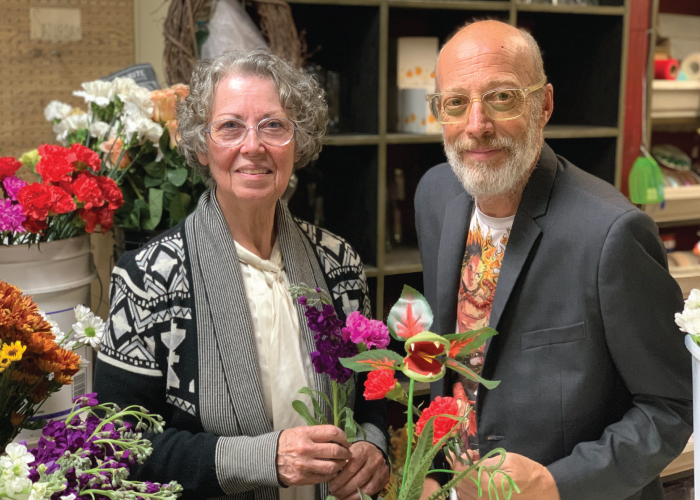 We are excited to welcome Delaine Gates and Darrin Riley as co-directors of our spring 2023 production of “Little Shop of Horrors.” Longtime veterans of the stage, Gates and Riley have worked together dozens of times over the years, including at SAAC, at El Dorado High School, and at festivals and performances internationally. They will join forces again with “Little Shop of Horrors,” sponsored by Murphy-Pitard Jewelers and All About Flowers, and scheduled to take the stage March 3-5 and 9-11, 2023.

Delaine Gates is a veteran director with more than 100 productions under her belt. The longtime director of the El Dorado High School theatre program and Thespian Troupe 42, she thinks of herself as a “process director” who loves guiding actors through their creative journey. She and Darrin Riley, an accomplished actor and director in his own right, have collaborated on 45 different productions. Their creative chemistry has been seen in projects as diverse as the South Arkansas Arts Center’s 2016 production of “Frankenstein,” the 2014 production of “Les Miserables” in conjunction with the South Arkansas Symphony, and the 2011 Thespian Troupe 42 production of “Hairspray”—all the way back to their very first collaboration in a 1992 production of “Waiting for Godot”.

Gates and Riley love “Little Shop of Horrors” for its darkly comic energy and Motown-inspired musical numbers. The show, which was written by Howard Ashman and Alan Menken, is one of the longest-running off-Broadway musicals ever, and was adapted into a 1986 film starring Rick Moranis. With a bloodthirsty plant from space as its sci-fi centerpiece, the show is filled with beloved characters like downtrodden Seymour, his beloved Audrey, an evil dentist, and a three-girl doo-wop chorus.

“’Little Shop’ is a thriller with comic elements, but it’s also an exploration into the psyche of each character as they react to outside influences beyond their control,” said Riley. “The audience goes into their world and experiences their lives as if it were real.”

“In essence it’s a Greek tragedy with a sci-fi twist,” continued Gates. “We want to keep all those chills and thrills, but with a deeper exploration of the human condition.”

The co-directors plan auditions for this charming, yet terrifying, tale on January 15 and 16, 2023. For audition information, call the South Arkansas Arts Center at 870-862-5474.