Director Cherrie Sciro, Music Director DH Clark, Choreographer Hannah Marsh, Assistant Director Hannah Davis
This will be an informal time where people interested in auditioning can ask the production staff questions. Anyone needing advice or encouragement to help prep for auditions or making an audition video should attend. The reception will be hosted in the gallery following the Mamma Mia “Flash Mob” Dance Rehearsal in the ballet studio at 5:30pm.

Parts for 6 Women, 7 Men, 14-18 Ensemble of Singers & Dancers. Characters ages 18-50+, 16 yrs & up that can look like adults are welcome. Prepare a song from the show. Mamma Mia, Dancing Queen and Voulez Vous are good general selections. The music director has also included a list of song recommendations for each of the main characters.  Sheet music and accompaniment tracks are available. LINK TO AUDITION MUSIC DROPBOX 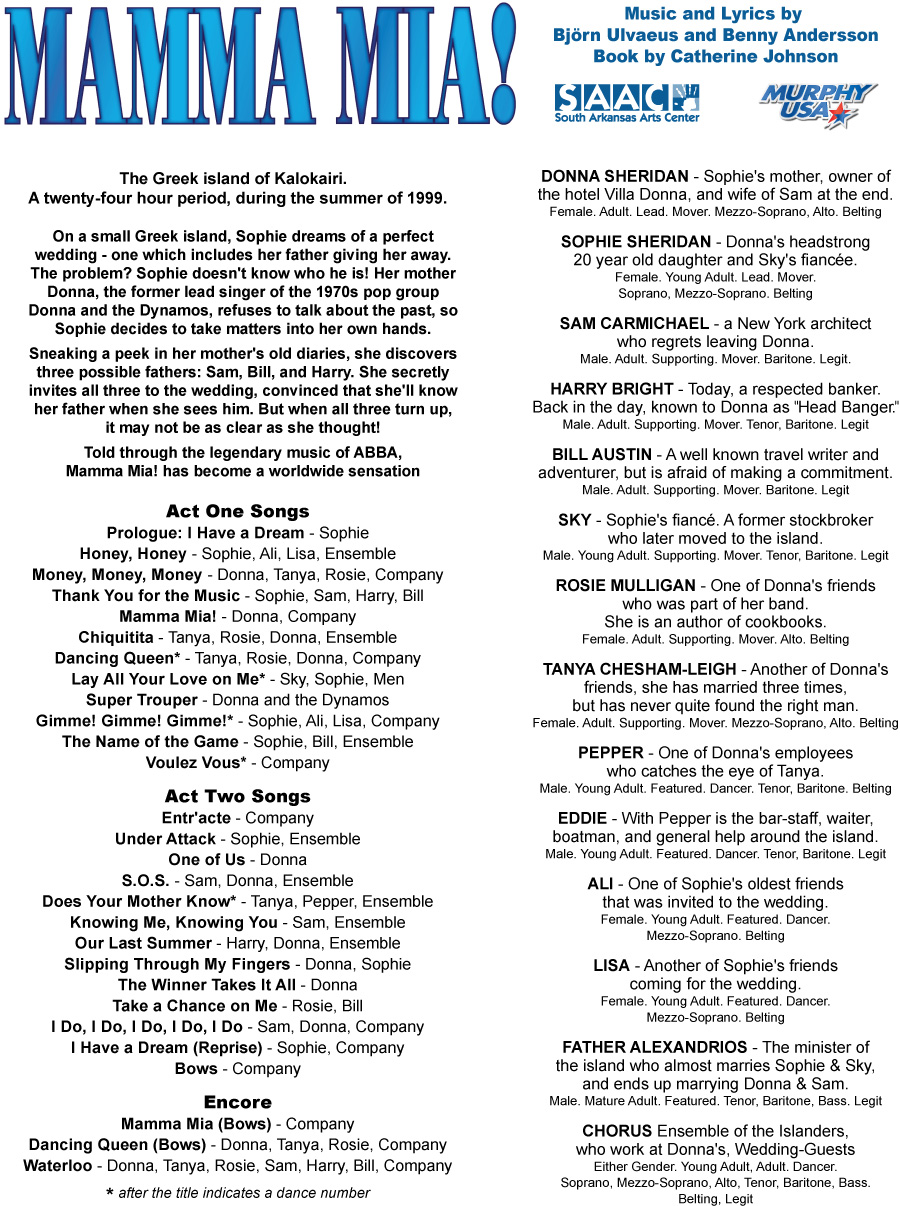 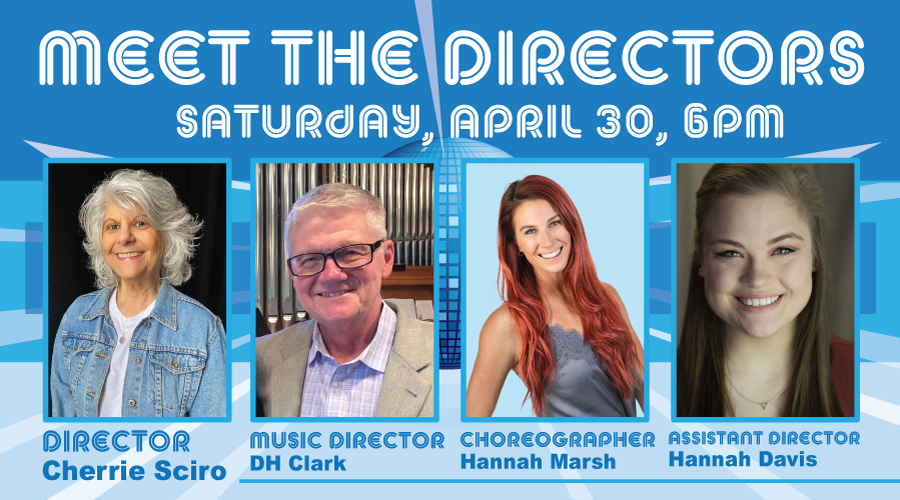 We could not be more excited about our summer musical! While we are excited to showcase Mamma Mia! this summer, we are perhaps even more thrilled to introduce the directors and creative team for this production.

Director: Cherrie Sciro is the Coordinator of Theatre and a Professor at Louisiana Tech. Additionally, Sciro is known nationally for her Broadway credits which include Production Coordinator of the Tony Award-winning productions Cats, Les Misérables, Phantom of the Opera, and Miss Saigon. She has also served as a stage manager and production manager for various other shows on Broadway, for the 2001 New Year’s Eve in Times Square in New York City, for the Hard Rock Rockfest in Atlanta, GA, and Road Manager for Patti LuPone and Dixie Carter. Her International credits include the London, England productions of Les Misérables, Phantom of the Opera, Miss Saigon, Follies, and Sunset Boulevard. She also served as the Production Manager for the Olympic Games in Barcelona, Spain. Sciro holds many national credits as well, and was honored by being named a Distinguished Alumni of the John F. Kennedy Center for the Performing Arts.

Sciro’s colleague and the Musical Director for Mamma Mia!, DH Clark, says of Sciro, “She is an incredible director who has vast experience. Her insight into character development and staging is second to none. [Cast members] will find this to be not only fun and fulfilling, but also a huge learning experience.” Sciro is eagerly anticipating the start of Mamma Mia! at SAAC. This is her second time directing the show, the first being at the Strauss Theater Center in Monroe, LA. Sciro remarked, “It takes a dedicated person to turn a group of people into an exceptional ensemble,” and she is up for the challenge!

Musical Director: D.H. Clark (the D and the H have a story; ask him about it!) followed a dual career path in medicine and music for over fifty years.. He retired from the practice of Obstetrics and Gynecology in 2018, but continues as a church musician (organist and liturgist). He is an ordained minister at Northminster Church in Monroe, Louisiana. Clark’s earliest experience with live theatre was sitting in the nosebleed section in 1966 at the St. James Theater in New York while Ginger Rogers “took him to heaven” in Hello Dolly. Musical Theatre is his second passion along with church music.

Clark has been musical director or assistant for A Chorus Line, Shenandoah, How to Succeed, and many Cottonland Christmas productions at Strauss Theater Center in Monroe, La.  His most recent work was their production of Mamma Mia!, working alongside our director for this show, Cherrie Sciro. He is thrilled to be repeating that experience in El Dorado, and we are thrilled to have him!

Choreographer: Hannah Marsh is a native of Junction City, AR, and is the owner of Lucy’s Ladies Dance Studio in El Dorado. She has been training in various dance styles for over 30 years. Marsh studied under Cydni Hutson in Homer, LA, for 15 years and was also a soloist in the Twin City Ballet Company. After graduating high school, she spent a year at the Edge Performing Arts Center in Los Angeles, CA. She then signed a contract with Go2Talent agency and started working as a professional dancer. She is now back home in Arkansas, sharing her knowledge and love for dance with El Dorado. Her outreach extends beyond her own studio, as Marsh was the choreographer for SAAC’s production of Singin’ in the Rain in 2018.

Assistant Director: Hannah Davis is an El Dorado native, 8th grade English teacher at Barton Junior High School, and SAAC drama instructor (among many other things). She most recently directed the youth theatre production of The Enchanted Bookshop and co-directed main stage production of CLUE On Stage. Davis is no stranger to theatre, and the SAAC stage happens to be her favorite. Some of her past credits include: director of SAAC’s Annie KIDS; the character Rhonda and the hair, wig and makeup designer for SAAC’s Singin’ In The Rain; Grempkin in SAAC’s Peter and the Starcatcher; Madame Spanella in SAAC’s Breakfast at Tiffany’s; and director of SAAC’s Disney’s Aristocats KIDS. She has a bachelor’s degree in theatre from Louisiana Tech University, and studied under Director, Cherrie Sciro. The South Arkansas Arts Center encourages anyone (16 years of age or older) to audition and have the opportunity to work with this outstanding team of professionals.