SAAC brings live theatre back to the stage with the classic Southern dramedy “Steel Magnolias,” written by Robert Harling.
The beloved story centers on the lives of six women in the fictional Chinquapin, Louisiana beauty shop of Truvy Jones and her eager new assistant, Annelle. Her friends and clients include the eccentric millionaire Clairee, kindly curmudgeon Ouiser, social leader M’Lynn, and her daughter Shelby. Following their stories over several years, the play is built on a framework of love and resilience.

Auditions Monday, April 26
Auditions Thursday, April 29
Registration 6:00. Auditions at 6:30.
Callbacks Saturday, May 1 • The director will schedule individual times with anyone he needs to see for callbacks. Callbacks are NOT an indication of casting.
Rehearsal Begins May 3
Production Dates June 17-20 & 24-27

Roles for 6 Women • Ensemble Cast
Ages range from about 19 to early 70s. Everyone who can look or act the part is welcome to audition. No restrictions on ethnic or racial background.

Lobby opens a half hour before auditions. Arrive in time to fill out an audition form and get a head shot. Please bring your calendar and provide a complete list of rehearsal conflicts.
Monologues: All auditioners will be asked to read a monologue from the show. The director has selected two options for each character. Select one of the monologues and note that you may be asked to read the second one as well. Monologues do not need to be memorized, but auditioners are welcome to do so.
Scene Readings: The director will provide scene readings at Auditions and Callbacks. No advance preparations is necessary. Auditioners are encouraged to read the script before auditions. Copies are available for a 48 hours check out. For more information call SAAC at 870-862-5474. 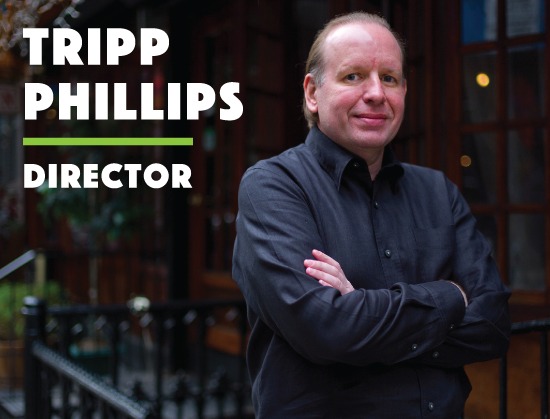 DIRECTOR • TRIPP PHILLIPS is a New York-based production stage manager and assistant director with numerous Broadway credits including Plaza Suite, All My Sons, Carousel, War Paint, The Front Page, Finding Neverland, A Gentleman’s Guide…, Macbeth, Born Yesterday, Lombardi, Finian’s Rainbow, Pal Joey, Passing Strange, The Ritz, 42nd Street, Swing!, Ring Round the Moon, Dream The King and I, and How to Succeed in Business Without Really Trying. National tours include Memphis, A Christmas Story, Jersey Boys, and White Christmas. He also has a number of off-Broadway and regional theatre credits as well as 12 productions for New York City Center’s Encores! series of Great American Musicals.

He has worked as a lecturer and guest instructor at the Yale School of Drama, Columbia University, and Penn State University. An Arkansas native – born in Hot Springs and raised in El Dorado – he began his theatre work as a child actor and then a young director at the South Arkansas Arts Center in the 1970s and 80s. He holds a B.A. in Theatre from Centenary College of Louisiana and an M.F.A. in Directing from the University of Mississippi, from which he was graduated with honors in 1986. From 1986 to 1994, before beginning his work on Broadway, Tripp was the Artistic/Managing Director of the York Little Theatre in York, Pennsylvania, an acclaimed and popular community theatre, where he directed over 60 productions in a period of eight years.

The Story: The action is set in Truvy’s beauty salon in Chinquapin, Louisiana, where all the ladies who are “anybody” come to have their hair done. Helped by her eager new assistant, Annelle (who is not sure whether or not she is still married), the outspoken, wise-cracking Truvy dispenses shampoos and free advice to the town’s rich curmudgeon, Ouiser, (“I’m not crazy, I’ve just been in a bad mood for forty years”); an eccentric millionaire, Miss Clairee, who has a raging sweet tooth; and the local social leader, M’Lynn, whose daughter, Shelby (the prettiest girl in town), is about to marry a “good ole boy.” Filled with hilarious repartee and not a few acerbic but humorously revealing verbal collisions, the play moves toward tragedy when, in the second act, the spunky Shelby (who is a diabetic) risks pregnancy and forfeits her life. The sudden realization of their mortality affects the others, but also draws on the underlying strength—and love—which give the play, and its characters, the special quality to make them truly touching, funny and marvelously amiable company in good times and bad.

TRUVY JONES – 40ish. She is the owner of the beauty shop in fictional Chinquapin Parish, Louisiana, where Steel Magnolias is set. Truvy loves her work as a hair stylist and is, in fact, obsessed with everything having to do with hair (e.g., “Baltimore is the hair capital of the world!”). She is married to a “slug” who spends most of his time parked in front of the TV and is the mother of twin 18-year-old sons (“Poot” and Louie) who will soon be moving out and leaving her “nest.” She may be a bit vain in terms of being honest about her age and size. Physically, she is, in her own words, built for “comfort not speed” and could be described as a bit “top heavy” (or buxom). She’s a frustrated romantic and apprehensive about soon being alone with only her negligent husband. A church-going woman (a Methodist), Truvy is a gossip – but never a mean or vindictive one. She soon becomes a surrogate mother of sorts for Annelle, her “semi- daughter.” Truvy is a bit naïve about the world at large, but, like all the “magnolias” in the play, she is kind, caring, and resilient. The actress will have to be believable styling hair and manicuring nails onstage (training will be given).

ANNELLE DUPUY-DeSOTO – age about 19 (one of the other characters describes her by saying: “she can’t be more than 18”). A young hairstylist, when the play begins she is applying to Trudy’s beauty salon for a job. Recently married to a shady character named Bunky Dupuy, her fugitive husband has taken off with her car, money, and even most of her clothes, leaving her in an understandably fragile state. She is justifiably nervous and concerned about her finances and her future. From Zwolle, Louisiana, she is naïve about the ways of the world. She has quite an emotional arc over the course of the play: moving from a shy, insecure, anxious girl to a young woman who gradually finds con- fidence and maturity with a new job and enthusiastic interest in the local Baptist church. She becomes a surrogate daughter of sorts to motherly Truvy and, over the course of the play, meets a young man named Sammy DeSoto, marries him, and becomes pregnant with her first child. Very good at heart, at times she gets over-zealous with her religious beliefs. A lovable, sweet girl, Annelle is shy, private, and creative. The actress will have to be believable shampooing and styling hair onstage (training will be given).

CLAIREE BELCHER – age late 60s to early 70s. The former “First Lady of Chinquapin,” she is a “grande dame” who has only recently lost her husband (Lloyd) of almost 50 years, the former Mayor of the town. She is still adjusting to being a new widow. Clairee is from a wealthy and distinguished family (the Marmillions) and is confident in her social position in the town. Physically, she has a sweet tooth and is likely a little plump, a feature which she exaggerates; she is also attractive and stylish. She has a son and daughter-in-law who live in Tickfaw, Louisiana; is next-door neighbor to the Eatentons; best friend forever to Ouiser Boudreuax; and an enthusiastic gossip. She develops three interests that shape her life over the course of the play: the local high school football team; the local radio station KPPD, which she eventually buys; and viewing theatre. She is described as having “a smart mouth” and also has a self- deprecating type of humor as she frequently makes fun of herself. She has “plenty of money.” In one scene, Clairee has a hoarse voice from yelling herself silly at a football game; the actress must pull off the hoarseness without being inaudible to the audience.

SHELBY EATENTON-LATCHERIE – age about 25. Shelby is the “prettiest girl in town.” She is ideally blonde (can be wigged if necessary), slim, charming, ebullient, and appealing. The daughter of M’Lynn and Drum Eatenton, sister to Tommy and Jonathan, and soon to be wed to Jackson Latcherie, Shelby is free-spirited and tends to speak her mind, which often brings her into conflict with her mother. She takes her life in her hands when she decides to get pregnant despite doctors’ warnings of her fragile physical condition (she is severely diabetic). She works as a pediatric nurse in a hospital with newborn babies, including premature ones, a career path which increases her resolve to give birth to her own child. There is something ethereal, dainty, elegant and graceful about Shelby – one senses that she has always been beautiful and popular and, despite her health challenges, an easygoing and happy person. After giving birth to her child (an event that happens between Acts I and II), Shelby is elated to have a baby but, as a result, suffers more severe medical problems as well as the onset of marital problems with her challenging husband. The actress must pull off a creditable diabetic attack in Act I.

M’LYNN (Mary Lynn) EATENTON – age early 50s, though she has the look and constitution of someone a decade younger. Socially prominent in the town, married to Drum Eatenton, a successful and affluent man, M’Lynn is herself a career woman who works as a counselor at the local Mental Guidance Center. She is mother to Shelby and two sons, Tommy and Jonathan. She worries a great deal about her headstrong daughter and the two clash frequently over some of Shelby’s life choices, specifically Shelby’s choice to have a baby. M’Lynn challenges her daughter only because of a genuine and deeply-felt concern and worry for her child. M’Lynn also has some marital problems with her husband which eventually get better when they together find peace later in the play’s action. In Act II, we learn that M’Lynn and Drum have just marked their 30th wedding anniversary. M’Lynn is smart, articulate, concerned, and kind. The actress playing M’Lynn has a difficult acting challenge to pull off in Act II, Scene 2, the day of Shelby’s funeral, in a scene which requires a display of legitimate and heartfelt emotions as she suffers a wrenching breakdown over the loss of her child. It is a tall acting order.

OUISER (pronounced “Weezer”) BOUDREAUX – age late 60s to early 70s. A wealthy curmudgeon, she is acerbic but ultimately lovable. Possessed of a sharp tongue, she can be sardonic, severe, sarcastic, scathing, severe, snarky, and stinging – BUT the barbs must never totally mask that a good, kind, and caring woman exists beneath the veneer of a brittle older woman. She is dear friends with the ladies in the neighborhood, though sheand M’Lynn’s husband Drum are opposing parties in a longtime feud. Ouiser is a single lady, having been previously married to “two total deadbeats”; she is also the mother of “three ungrateful children.” In her own words, she has “more money than God.” She and Clairee are friends of many decades and, likely because of this, they tease, taunt, and torment each other relentlessly. Her closest companion is her mangy and disreputable old dog, Rhett, for years on his “last legs.” As Ouiser herself says, “I’m not crazy – I’ve just been in a bad mood for forty years.” The actress playing Ouiser needs to have a strong sense of comic timing and to not be afraid to “go there” with a strong attack on the character’s outward bile and nastiness. Also, we may explore having Ouiser smoke onstage (but we would use herbal stage cigarettes).